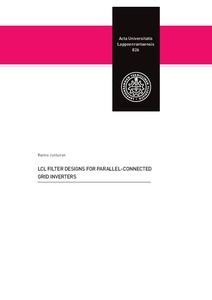 Power generation has become more dispersed as a result of the increasing popularity of the renewable energy sources, which interface with the utility grid with power electronic converters. Higher power levels can be achieved by using parallel-connected inverters, which require at least individual inductors.

This doctoral dissertation studies LCL filter designs in parallel-connected grid inverters at a system level. The component optimization is not covered in the study. However, some implications of the component design are discussed. It is investigated how the filter design differs from the single inverter case, and the analysed filter topologies are compared to find differences between them.

Different filter configurations were modelled and a theoretical study of the filter designs was made to compare the resonance frequencies, the effects of parallel connection of the filters, and the energies stored in the filter components. Simulations were made to verify the calculations and to test the effect of component value tolerances.

The LCL filter designs present different levels of modularity in the design, which gives more freedom for the designer to choose the most suitable filter design for the system.