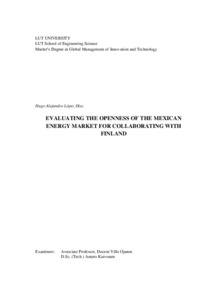 The Mexican energy market has been under recent change due to political reforms regarding energy. This has opened the door for foreign companies to enter the market and start doing business in Mexico, fostering innovation and technological growth. For a Finnish company, this could represent the opportunity for expanding its operations into the Mexican market. Nevertheless, a collaboration like the one proposed in this research must overcome a series of hurdles, many of them originate from the cultural, political and technological differences between both countries.
This research was aimed to evaluate the openness of the Mexican energy market regarding renewable energy and for collaborating with Finland in a project involving it. The analysis included both the Mexican and Finnish perspectives in the areas of open innovation, energy markets and energy policies. The research included a literature review followed by a quantitative and qualitative analyses of the gained data. The results of the research conclude that a collaboration between both countries is recommended but there are a series of risks that need to be considered for the project to be successful. A risk mitigation model was proposed to deal with those risks.