Methanol synthesis from CO2 and H2 by reactive distillation 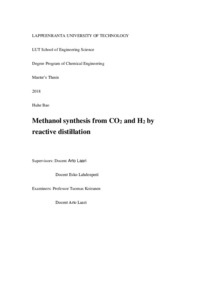 The widely use of fossil fuel generates large amount of CO2, which causes greenhouse effect. Since fossil fuel is nonrenewable, a potential energy crisis is no doubt coming. Thus, the reuse of CO2 has generated a lot of attention. Among them, CO2 hydrogenation is one of the most attractive ways to transform CO2 into hydrocarbons, which can be used as an alternative for conventional fossil fuel.
Methanol is one of promising candidate, which has various applications in transport, chemical industry, pharmaceutical industry, and other fields. Recent years has seen a rapid growth in methanol production. The conventional methanol process uses fossil fuel, such as coal and natural gas, as the raw material. Due to the similarity to conventional methanol process, there are lot of researches in CO2 hydrogenation to methanol. There is already one industrial CO2 to methanol plant operating in Iceland.
Most CO2 to methanol studies consider gas–phase reaction, which has however relatively low conversion and severe conditions. In contrast, liquid phase CO2 hydrogenation to methanol has in principle milder conditions and higher conversion and requires less equipment when implemented in pilot or industrial scale. Moreover, reactive distillation process, which combines liquid phase CO2 hydrogenation and separation of products, can significantly improve conversion and overcome thermodynamic limitations.
In the thesis, reactive distillation technology is used to enhance the CO2 hydrogenation. A simulation model is built to study the process using Aspen Plus. The process includes the main reactive distillation column and a downstream unit to purify methanol product and recover excess raw materials. Besides, a detailed solution is given to separate the azeotropic water–butanol solution, which is formed during the process. Moreover, the whole process is optimized to obtain the best operating parameters and suitable equipment variables.
In conclusion, the one–way methanol conversion is much higher and required conditions are much lower than in conventional gas–phase methanol process. The whole process does not contain any complex circulating lines and most unreacted raw materials can be recycled.