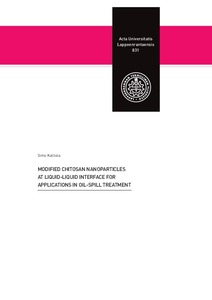 Oil-spills continue to be a serious threat to the environment and the climate change is expected to increase oil related industry and transportation in Arctic regions due to the melting of the ice cover. Nanoparticles prepared from renewable, biodegradable and non-toxic biopolymers could provide feasible alternative to traditionally used molecular dispersants which are toxic. Chitosan is a renewable, biodegradable and non-toxic polysaccharide derived from the shells of crustacean, for example. A biodegradable and non-toxic chitosan derivative carboxymethyl chitosan was synthesized and used to prepare nanoparticles with and without cross-linking using CaCl2. The CaCl2 cross-linked nanoparticles were fairly stable in increased NaCl concentration and could be made stable in varying pH (7-9) by adjusting the pH during the preparation of the nanoparticles. The nanoparticles could adsorb into the oil-water interface and stabilize emulsions. The non-cross-linked nanoparticles were formed by adjusting pH close to the pI value of carboxymethyl chitosan. The nanoparticles could form gel-like emulsions with oil, and the emulsification was reversible by pH adjustment due to the dissolution of the particles. Additional hydrophobic modification increased the emulsification ability of the nanoparticles. Also, vanillin grafted chitosan particles were synthesized and studied for oil emulsification. The particles aggregated upon mixing with oil and encapsulated small droplets with in the aggregates effectively separating the oil from the aqueous phase.