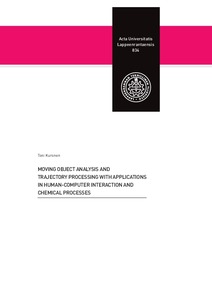 In order to better understand processes with moving objects using computer vision, it is important to be able to measure and to analyze how the objects move. The recent advances in imaging technology and in image-based object tracking techniques have made it possible to measure the object movement accurately from video without the need for other sensors. This work focuses on the practical applications of a 3D touch-screen experiment and the moving object analysis of droplets in a chemical mass transfer experiment.

A two-camera framework for tracking finger movements in 3D was developed and evaluated with the study of human-computer interaction. Moreover, trajectory processing and video synchronization were introduced and a 3D trajectory reconstruction technique was proposed. The framework was successfully evaluated in an application where stereoscopic touch-screen usability was studied using stereoscopic stimuli. Finally, a set of hand trajectory features were computed from the trajectory data and it was shown that selected features differ statistically significantly between the targets displayed at different depths.

This work consisted of: selecting suitable moving object detection and tracking methods for two applications, the post-processing of the trajectories, 3D trajectory reconstruction, and characterizing and visualizing the object data. The applicability of readily available methods for moving object detection and analysis was successfully demonstrated in two application areas. With modifications, both of the used frameworks can be extended for use in other similar applications.