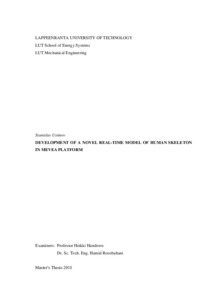 The aim of the project was to develop a real-time simulation of the human skeleton model for the clinical application and to describe real-time changes of the torque, while the person was moving in front of motion capture camera. The hypothesis of the project is based on the fact that there are few real-time skeleton models, which are used in physiotherapy rehabilitation, and Mevea solution is novel for this purpose.

The project was made using various software such as Mevea simulation software, Matlab Simulink, 3ds Max, and Windows SDK 2.0. Kinect for Windows v2.0 sensor was used as system hardware. Firstly, Mevea multibody model of the human skeleton was created. Then, Simulink external interface for Mevea was made. Secondly, the connection between the Kinect and the Simulink was established. After that, in order to obtain the results of the project, the developed model has been tested. The experimental section was divided into three separate case studies that were a test of the elbow joint, thoracic joint, and full body.

Results of the project are described via graphs which show changes in torque and angular position of the elbow and thoracic joints, according to the input position of joints. Case study 3 provides the results of the full body test, which was made with Kinect for Windows device. The results of this case study are demonstrated via connection of the system and obtaining of torque values from Mevea software.