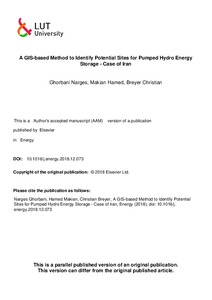 Pumped hydro energy storage (PHES) is the most widespread and mature utility-scale storage technology currently available and it is likely to remain a competitive solution for modern energy systems based on high penetration of solar PV and wind energy. This study estimates the technical potential of PHES in Iran through automatised GIS-based models based on four topologies. Two topologies focus on the transformation of existing reservoirs while the third topology which is developed based on permanent rivers of the country offers more alternative sites. The fourth topology assesses the potential of seawater PHES plants as a potential solution for regions characterised by freshwater scarcity. The TOPSIS method is applied to the discovered feasible sites to integrate an economic sensitivity into the evaluation process. Results show that Iran has a favourable topography for PHES and the technical potential of the studied topologies reaches up to 5108 GWh from 250 discovered sites, compared to the existing 5.1 GWh PHES capacity, while a maximum distance of 20 km is considered between reservoirs of a PHES plant.