“Robots do not replace a nurse with a beating heart”: The publicity around a robotic innovation in elderly care 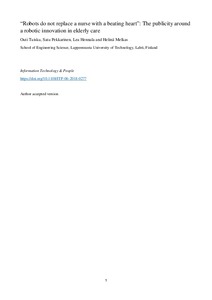 The purpose of this paper is to investigate the publicity around the implementation of the Zora robot in elderly-care services in Lahti, Finland. The aim is to discover opinions concerning the use of robots in elderly care as well as the arguments and justifications behind those opinions. Zora is a humanoid robot intended to promote mobility and rehabilitation. The Lahti pilot was the first Zora pilot in Finland in public elderly-care services. It received much publicity, both regionally and nationally.
Design/methodology/approach

This study is based on an empirical case study on the implementation of the Zora robot in elderly-care services. The data consist of interviews with personnel who operated Zora and comments from the general public about the “Zora” robot. Two data sources were used: 107 comments were collected from online and print media, and the personnel (n=39) who worked with Zora were interviewed. The data were analysed by means of interpretative content analysis.
Findings

The results show that public opinion is mainly negative, but that the commentators apparently have little information about the robot and its tasks. The personnel had more positive views; they saw it as a recreational tool, not as a replacement for their own roles.
Originality/value

There is clearly a need for more information, for a better informed discussion on how robots can be used in elderly care and how to involve the general public in this discussion in a constructive way.