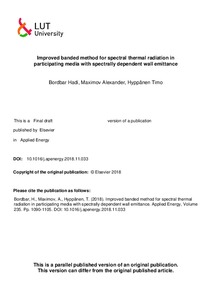 To develop an efficient and practical spectral radiation model for CFD simulations, a banded approach is proposed for a mixture of carbon dioxide and water vapor in varying thermodynamic states. Using a previously reported band dividing scheme, a statistical narrow band model is implemented to provide gray band absorption coefficient databases. The databases were then approximated by certain simple correlations, which can be readily used in CFD calculations of RTE solvers. The correlations were validated in several 1D and 3D benchmarks representing various combustion conditions. The accuracy and CPU cost of the proposed banded approach were studied and compared with those of other similar methods. The results demonstrated that the new approach is an efficient and accurate method that can be conveniently applied in a commercial CFD code for spectral radiation; moreover, it can handle non-gray walls. As a practical case study, the proposed approach was used to simulate radiative heat transfer within a back pass channel of a CFB boiler. The effect of combustion scenarios, i.e., air- and oxygen-fired, boiler load, inlet flow conditions, and wall material, was analyzed by the CFD model. The predictions of two different RTE solvers, i.e., P1 and DO, and the required CPU time were compared for gray and non-gray models.