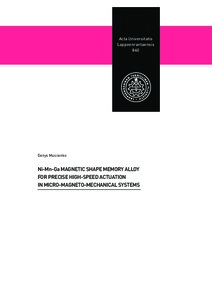 Single crystalline Ni-Mn-Ga alloys are known for their large reversible magnetic-field-induced strain (MFIS) of several percent. This effect was discovered and named magnetic shape memory (MSM) by K. Ullakko in 1996. Since then it has been exciting scientific minds with its amazing properties and hidden potential. The mechanism behind the MSM effect is the magnetically induced reorientation (MIR) of the crystal lattice in martensite phase. Martensitic twin variants with the short crystallographic c-axis (axis of easy magnetization) oriented along the applied magnetic field grow at the expense of other variants with different orientation. Despite numerous studies devoted to bulk Ni-Mn-Ga elements, the research on the behavior of the MSM materials at microscale is limited.

This Thesis presents the attempt to fabricate MSM microdevice by using top-down approach, i. e. decreasing the dimensions of a bulk Ni-Mn-Ga single crystal with defined composition and known properties. The possibility of MIR in Ni-Mn-Ga foils thinned down to 1 μm was revealed. Prototyping technology (based on FIB milling and electro-chemical etching) for MSM microdevices was developed and used for fabrication of the micropillars. Difference in dynamics of type I and type II twin boundaries at the microscale was found. The measured actuation velocities of 0.18 and 1.3 (m/s) for type I and type II TBs correspond strongly with the previously reported values for bulk, mm-sized samples. The actuation acceleration of micropillars was found to be approximately an order of magnitude larger than in bulk samples, demonstrating a well-pronounced scaling effect connected to the decrease of cross-section in actuated MSM crystals and therefore the reduction of moving mass. Twinning stresses for single twin boundaries motion in micropillars were revealed to be ~ 2:3 MPa for type I twins and ~ 0:8 MPa for type II. It is suggested that increased twinning stress values (in comparison to the values for bulk material) are related to the incomplete removal of surface defects, but this issue requires further investigation. It was demonstrated that in micropillars giant MFIS of more than 6 % can be obtained in about 5 μs.

The results presented in the Thesis suggest the possibility of fabricating MSM-based microdevices with bandwidth of 105 Hz, which is an order higher than previously reported.