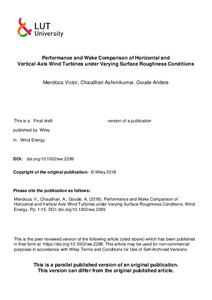 A numerical study of both a horizontal axis wind turbine (HAWT) and a vertical axis wind turbine
(VAWT) with similar size and power rating is presented. These large scale turbines have
been tested when operating stand-alone at their optimal tip speed ratio (TSR) within a neutrallystratified
ABL. The impact of three different surface roughness lengths on the turbine performance
is studied for the both turbines. The turbines performance, the response to the variation
in the surface roughness of terrain and the most relevant phenomena involved on the resulting
wake were investigated. The main goal was to evaluate the differences and similarities of these
two different types of turbine when they operate under the same atmospheric flow conditions.
An actuator line model (ALM) was used together with the large eddy simulation (LES) approach
for predicting wake effects, and it was implemented using the open-source CFD library Open-
FOAM to solve the governing equations and to compute the resulting flow fields. This model was
first validated using wind tunnel measurements of power coefficients and wake of interacting
HAWTs, and then employed to study the wake structure of both full scale turbines. A preliminary
study test comparing the forces on a VAWT blades against measurements was also investigated.
These obtained results showed a better performance and shorter wake (faster recovery) for a
HAWTcompared to a VAWTfor the same atmospheric conditions.