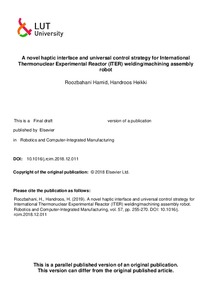 This paper proposes a universal control strategy and novel haptic interface for the International Thermonuclear Experimental Reactor (ITER) welding/machining robot. The developed method implements a reliable position control and sense between the human and the robot as well as between the robot and the task environment in which provides highly accurate position control based on joystick inputs with real-time haptic capabilities. The proposed control structure has the characteristics of a universal technique independent of the actual control algorithm and it can be applied with other suitable control methods as a real-time control strategy. One of the contributions of this paper is that the proposed control method combines a directed random search method and real-time simulation to develop an intelligent controller in which each generation of parameters is tested on-line by the real-time simulator before being applied to the real process. The controller was evaluated on a hydraulic position servo system where the simulator of the hydraulic system was built based on Markov chain Monte Carlo (MCMC) method. A Particle Swarm Optimization (PSO) algorithm combined with the foraging behavior of E. coli bacteria was utilized as the directed random search engine. PSO is influenced by the simulation of social behavior in which each individual agent of the possible solution population, benefits from its history and its interactions with other agents within the population. This sharing of knowledge helps facilitate faster convergence to an optimal solution. From the other side, the effect of Bacterial Foraging Optimization (BFO) of E. coli is that the agent is making a decision to which position to move. The agent does this with attention to the previous data stored in the memory as the best past position. These selection behaviors of particles help to avoid poor foraging and improve foraging strategies. In conclusion, the proposed control and haptic strategy allows the operator to be kinetically plugged into the work environment and simultaneously provides force feedback sense with high controllability without neglecting the system dynamics.