Recovery of indium from indium tin oxide by solvent extraction 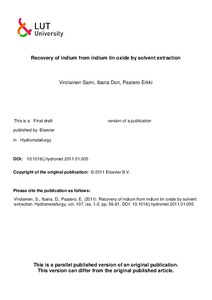 Three solvent systems were chosen to study their selectivity for the separation of indium from tin: TBP, D2EHPA and a mixture of both. With either 1 M of TBP or 0.2 M of D2EHPA + 0.8 M of TBP, tin could be selectively extracted from a 1.5 M HCl solution of this metal. D2EHPA extracts both indium and tin from H2SO4 media but indium could be selectively stripped with HCl from the loaded D2EHPA. Based on these results, a scheme for separating and concentrating indium from ITO by solvent extraction is proposed. The scheme includes dissolving ITO into 1 M of H2SO4, then extracting indium and tin to D2EHPA followed by selective stripping of indium into 1.5 M of HCl. With this process, HCl solution containing 12.2 g/L of indium could be achieved.