Ion exchange recovery of silver from concentrated base metal-chloride solutions 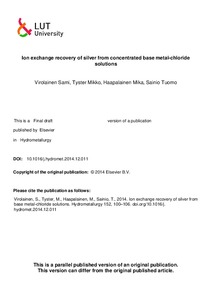 Ion exchange has not been extensively studied nor industrially used for recovering small amounts of silver from concentrated base metal-chloride solutions. A novel multistep process utilizing a weak anion exchanger with polyamine functionality is proposed and its performance was investigated experimentally. Suitability of a silica based polyamine functional resin WP-1 to the task was demonstrated by comparing Ag uptake and selectivity of several ion exchange resins and adsorbents using batch equilibrium experiments. HCl was found to be the best choice for washing impurities, especially Cu, from the bed after the loading step. Tetrasodium salt of EDTA was found suitable especially for selective desorption of lead from the loaded bed, but also other impurities were scrubbed if still present after the wash. Both thiosulfate and thiourea were shown to be effective for elution of Ag from the WP-1 bed, but thiourea is preferred because of the slight affinity of thiosulfate towards the resin. Stability of the performance of the process was shown in several consecutive adsorption–elution cycles containing all the needed washing and scrubbing steps. With the developed process, 72% pure silver product was obtained. As the washing step can be designed such that no silver is lost, the recovery yield for Ag depends only on the length of the loading step, and even 100% recovery can thus be achieved for the whole process.