Hyppää sisältöön
Näytä aineisto
JavaScript is disabled for your browser. Some features of this site may not work without it.
Järjestelmä sulkeutuu huoltotoimenpiteitä varten. Tallenna työsi ja kirjaudu ulos, ole hyvä. 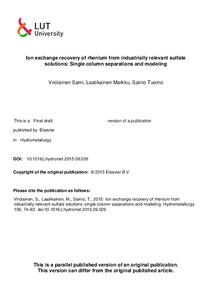 In this study, phenomena behind recovery of Re by weak anion exchangers from sulfate solutions containing Mo and As as impurities were investigated. All the metals exist as different kinds of oxyanions or, at some conditions, cations, meaning that several phenomena need to be taken into account. Batch uptake kinetics and dynamic breakthrough experiments were conducted with three commercial resins, and a model based on competitive Langmuir isotherm and an approximate diffusion equation was used to describe competitive sorption of the oxyacids. The separation systems are also discussed in relation to thermodynamic properties of the related oxyanions.

The ability of the anion exchangers to adsorb Re from concentrated sulfate solutions is related to the size and degree of hydration of perrhenate anion, ReO4−. Especially high Re equilibrium capacities of the Purolite A170 and gel-type A172 resins are related to their complex amine functional group, which favors less charged and more hydrophobic anions. However, the functionality did not explain the superior Re/Mo selectivity of the A172 resin detected especially in dynamic column experiments. Diffusion coefficients of all components were remarkably low in A172, and the measured moisture content of the resin was also low. These observations lead to a conclusion that the physical structure of the A172 is so dense that Mo species can only enter near the surface of the resin particle, which is the cause to a low uptake. Both of the Purolite resins also had a good Re/As selectivity, and are well suited for recovering Re from acidic sulfate solutions not containing Mo that are common in industrial applications.