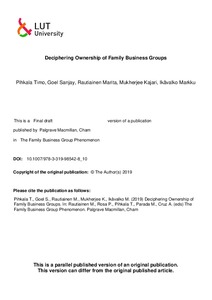 Family business groups are highly complex ownership structures. In this chapter, we suggest that owning a family business group needs to create benefits that overcome the transaction costs and ownership costs emerging from the complexities of ownership. We separate the effects of ownership into two main categories: the legal effects and the emotional effects. In terms of legal ownership, the control over the business and its resources suggests a freedom to operate the businesses and claims on their resources, to append new businesses to the FBG, to organize their relationships between the separate businesses and to exit from the businesses at will. The emotional benefits include the service of the owners’ self-deserving interests, positive effects on the family cohesion and togetherness and growth in social recognition and status. It seems that ownership along with its multiple effects may play a more vital role in explaining the development of family business groups than has been previously thought.