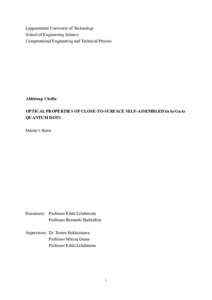 Quantum dots are novel semiconductor nanostructures that show great potential to be the future of a wide range of nanoscale optoelectronic device applications like photodetectors, solar cells and lasers. Self-assembled InAs quantum dots (QDs) grown in a GaAs matrix are proposed to be the primary elements for single and entangled photon sources used in quantum cryptography and quantum information processing. In order to incorporate quantum dots into optoelectronic and nanophotonic applications, they need to be fabricated close to the device surface. Generally, a semiconductor-capping layer is overgrown on the quantum dots to stabilize them and to minimize surface effects. The aim of this thesis is to investigate the influence of a GaAs capping layer on the optical properties of the InAs quantum dots.
The optical properties of single InAs∕GaAs QDs are investigated as a function of their distance from the GaAs/air interface. Interaction between the zero-dimensional quantum dot states and surface states are studied in close-to-surface individual QDs having a well-defined electronic structure. Capping the QDs with an overgrown GaAs layer has significant effects on the structural and optical properties. The influence of a capping layer of different thicknesses, mainly on the optical properties of QDs, has been experimentally investigated using low-temperature photoluminescence spectroscopy, micro-photoluminescence spectroscopy and time-resolved photoluminescence spectroscopy. The QD photoluminescence (PL) and carrier lifetime measurements show that quantum tunneling effects result in a sharp reduction of photoluminescence efficiency and carrier lifetime with decreasing wetting-layer-surface distance. For distances less than 40 nm, broadening of the PL linewidths of single QDs was observed. Since the exciton recombination time and efficiency are the same as exhibited by QDs situated in the bulk, the most likely cause of the observed PL linewidth broadening is spectral diffusion or dephasing.