Scenarios for sustainable energy in Scotland 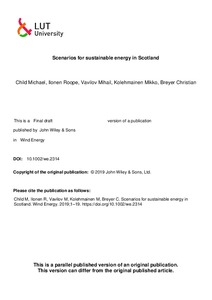 High shares of renewable energy, particularly wind power, were modelled in several future scenarios for the Scottish energy system. In the first part of this work, it was determined that Scotland could produce the equivalent baseload power for supply to England at a lower overall cost (99 €/MWh) than the proposed subsidized price (112 €/MWh) to be paid for electricity generated from the proposed Hinkley Point C nuclear power plant. This cost includes all extra generation capacity and transmission lines. In the second part of this work, it was determined that a 100% renewable energy system could be achieved at an annualized cost of 10.7 b€/a, approximately 8% less than the 11.7 b€/a expected for an energy system composed of 75% renewable energy. In the 100% renewable energy system, cost savings are achieved through effective energy storage, sector integration, and flexible generation from dispatchable renewable energy resources, such as hydropower (1.7 GWe), bioenergy, and synthetic fuels. Complementary resources to 23.4 GWe of wind power also included solar photovoltaics (10.1 GWe), tidal power (1.5 GWe), and wave power (0.3 GWe). It was also determined that carbon capture and utilization would be a preferable strategy to carbon capture and storage for Scotland. Complete defossilization of the Scottish energy system appears feasible by 2050, given the assumptions used in this study.