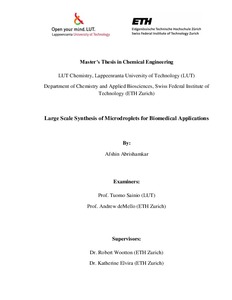 Droplet-based microfluidics is a continuously growing field of research that is emerging as an interdisciplinary branch of science due to its wide range of applications. Microdroplets are of interest as commodities in themselves for various applications such as biological, chemical, biomedical and medical systems. However, the production of large quantities of monodisperse homogeneous droplets for such processes is an area that has been always very challenging. This study focuses on two methods of high-throughput generation of microdroplets. In the first method, the bulk generation of microdroplets of water into FC-40 oil through a multi-layer microfluidic device is investigated. As a result, the best protocol for fabrication of a multi-layer PDMS device, followed by different proper designs for a multi-array microfluidic module, equipped with eight identical flow-focusing devices, are obtained. Moreover, the effective exploitation of a 3D printer in order to fabricate a multi-layer microfluidic device is represented. Whereas the second method takes advantage of Taylor-Couette flow pattern where a double-cylinder device, undergoing the aforementioned pattern, is optimized, designed and further constructed for the experimental investigations. The other accomplishment of this work lies in the exploitation of simulation to survey the droplet generation phenomenon. Consequently, the correct practical procedure for the simulation of a droplet generation system utilizing the software COMSOL Multiphysics® is studied and determined. Subsequently, a particular flow-focusing microdroplet generator is effectively simulated utilizing the same software leading to the numerical investigation on the effect of the input velocities ratio on the microdroplets size within the desired microdroplet generator.