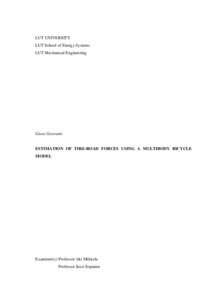 Vehicle handling systems are used to assist drivers in keeping proper control of the vehicle in hazardous situations. They take input from various sensors about the vehicle and road conditions and correcting them accordingly. Current research in this field involve the prediction of tire-road forces which is an important parameter needed for these vehicle handling systems. One of the methods used to predict these forces is the design of a virtual sensor that uses actual sensors to measure certain parameters combined with a mathematical model to derive the values for the desired forces. A multibody bicycle model to estimate tire-road forces is proposed in this research work. The four-rigid-body Whipple model has been used with appropriate selection of coordinates and frames. Kinematic analysis has been performed to obtain the velocities and accelerations of the bicycle. Inverse dynamic analysis has been performed by taking geometric coordinate inputs from the rider’s actions on the bicycle. These inputs were fed into the equations of motion to obtain the Lagrange multipliers which showed the values of the reaction forces acting on the tire along with the driving forces. The estimated tire-road forces match the expected behavior according to the rider’s actions and the bicycle can be seen simulating an accurate representation of the real motion. Experimental validation of the tire-forces was initially within the scope of the work. However, due to the inability to measure lateral forces with the current setup it has been moved to the future scope of this topic. The future scope also includes elimination of some assumptions in the model such as zero-slip and point-contact between wheels and ground. The addition of a dynamic observer following the expansion of the model to a four-wheel model has also been discussed as a future scope. The multibody bicycle model provides a good starting point for developing accurate and inexpensive virtual sensors for tire-force estimation suitable for application in vehicle handling and stability systems.