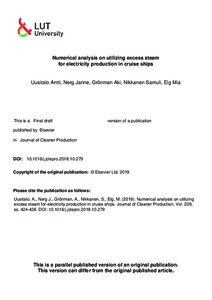 Marine sector has a significant contribution to the global greenhouse gas emissions and energy usage. Despite that the energy efficiency of ship engines has been increased drastically and the usage of new type of fuels such as LNG has reduced the emissions, significant improvements in the energy efficiency of ship energy systems could be still achieved by the more effective usage of different heat streams. In this study, the potential for producing electric power from excess steam of large cruise ships is investigated. The analysis is carried out for annual operational profiles of case cruise ships and the excess steam utilization is studied by means of 0.5 MW–2 MW scale steam turbine system and a combination of steam turbine and low temperature ORC system. A notable potential in utilizing the excess steam into electricity production was identified. It was observed that due to the high variations in the ship operation, the steam turbine design power and off-design performance have a significant impact on the electrical energy production. In the studied case cruise ships, steam turbine having a low condensing temperature or a combination of steam turbine and low temperature ORC reached the highest annual electric energy production potential, ranging from 3920 MWh/a to 5310 MWh/a.