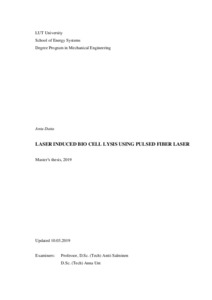 Dewatering of biosludge is a pre-treatment process for lessening the energy consumption needed for the final disposal. Disrupting the cells for freeing the inside water content can be a solution for dewatering. Laser cell lysis is the process of breaking the cells with the energy of the laser beam. Studies have shown that the plasma creation happening during the treatment acts as the main mechanism in laser-induced cell lysis. Laser beam generates plasma during the interaction with the material, which then initiates a shock wave, which is able to penetrate the walls of the cells at certain conditions. This research focused on studying the possibility of plasma formation with the use of a pulsed fiber laser. The intensity of generated plasma and distribution of wavelengths of that was recorded using a spectrometer. Focal point position, processing speed and hatch spacing were varied to compare the changes in brightness of the plasma produced. Focal position had the greatest influence on plasma intensity, as focusing effects the spot diameter of the laser beam on surface of the material and therefore also the power density. At a focal position of +2.0 mm, highest spectral intensity was achieved. Low scanning speed and small hatch spacing brought more energy to the area affected by the pulse and brighter plasma was produced.