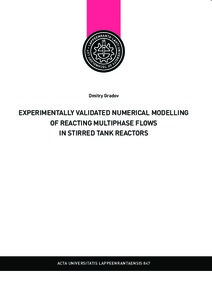 Homogenization of reacting flows by mixing is often important in order to achieve high reaction rates. Mechanical RANSagitation is the usual way to homogenize fluids used in industry. When supplied to fluid media, mechanical energy creates turbulence that facilitates mixing. A stirred tank reactor (STR) is a conventional operational unit designed to provide sufficient mixing and suitable conditions for reactions. The design of STRs depend on the operating conditions and properties of the reacting flows. Various types of stirred reactors are used in industry that are different in geometry but share the same principles of multiphase flow, turbulence, interphase mass transfer, and reaction.

Heterogeneous reactions demand extra attention, because the reaction rate is often limited by mass transfer. Mass transfer through interface boundary depends on mass transfer coefficient, interfacial contact area, through which species are transferred, and species concentration gradient. The mass transfer coefficient, on the other hand, depends on the physical properties of the fluid media and mixing rate at micro scale. In turbulent flow, micromixing is driven by a cascade of turbulent Kolmogorov eddies. In turn, the contact area between fluids is greatly dependent on bubble or droplet size distribution.

Empirical correlations, describing the design parameters of mixed multiphase systems, such as gas hold-up, mixing power, volumetric mass transfer etc., in an STR are predominantly based on existing lab- and pilot-scale reactors. Therefore, the design and scale-up of agitated reactors is unreliable, especially for multiphase systems. In order to increase STRs performance, to make reactor design more reliable, to optimize operational conditions, and to improve existing STRs in industry, advanced mathematical tools are required that are capable of examining and testing engineering ideas in detail, preferably before building a laboratory-scale prototype and especially during the scale-up process.

Computational fluid dynamics (CFD) can describe reacting flows in different geometries more accurately than conventional empirical correlations. Detailed information on reacting flows forms a powerful tool in reactor design and scale-up, finding of operational conditions, and studying STR performance under extreme conditions. Due to the nature of Eulerian mathematical approach to fluid flow description and limited spatial and temporal resolutions, CFD software comprises empirical parameters. Therefore, experimental validation of CFD models is crucial. Various intrusive and non-intrusive experimental methods have been invented and presented in literature to provide a trustworthy insight into fluid hydrodynamics. Each of them has a limited area of application and a combination of several measurement techniques is required to characterize reacting flows sufficiently to verify CFD models.

Several Reynolds-averaged Navier-Stokes (RANS) turbulence models were tested in a tall, round-bottomed STR equipped with a single Rushton turbine. The k-ɛ Realizable model was found to be the most feasible model for turbulence among the tested twoequation models and it produced the most accurate results in comparison to experiments in single phase mixing.

In the dilute gas–liquid mixing case, bubbles drag force was modelled most accurately by using the Schiller-Naumann’s drag force model in combination with Lane’s turbulence modification factor. The drag force impact was found to dominate compared to non-drag forces. On the other hand, in the dense gas–liquid flow of spherical bubbles in STR, the dampening effect of the bubble swarms on liquid flow was simulated by the Roghair’s modification factor and included into the bubble drag force formula.

The effect of the relative position of impeller blades to baffles on the simulated hydrodynamics via multiple reference frame (MRF) approach was assessed in single and multiphase mixing flows. The effect was found to be less significant in single phase but more evident in gas–liquid mixing. The simulated results at a fixed angular position of an impeller can be improved by averaging the hydrodynamic results simulated at the extreme positions of the impeller.

The three-phase hydrodynamics of a gold concentrate leaching process in a batch STR was modelled. The gold concentrate suspended in agitated liquid flow revealed non- Newtonian rheology, which was used in the simulation. The rheological properties of the agitated suspended solids were mimicked experimentally by in a water solution of carboxylmethyl cellulose (CMC), the hydrodynamics of which was measured by particle image velocimetry (PIV). Electrical impedance tomography (EIT) was used to visualize local gas hold-up. Using the assumption of constant bubble size, the local volumetric mass transfer coefficient of oxygen was calculated, which can be used to improve the reliability of the scale-up when designing larger-scale leaching reactors.

An experimental and numerical study of the effect of reagent feed location on the barium sulphate crystallization process was carried out in a semi-batch stirred reactor. The temporal development of crystallization was measured by the EIT technique. CFD modelling was applied to assess local hydrodynamics in a flat-bottomed stirred reactorequipped with a Rushton turbine. The effect of mixing, considered at macro and meso scales, was found to have a great impact on crystal size because the residence time distribution of the supersaturated concentration is a function of local mixing intensity in the feed area, as well as being a function of the global flow pattern of mixing.

Scale-up of a draft tube reactor was performed from laboratory to industrial scale using CFD modelling. The same number of cells was used in the mesh in both scales to analyze the effect of spatial discretization on the resolved hydrodynamics and gas-liquid mass transfer. An aerobic fermentation process was simulated in the draft tube OKTOP reactor at industrial scale with a known power number. The Newtonian gas–liquid flow, agitated by an impeller of special design, was modelled with an updated drag force that included the effect of bubble swarms. At constant bubble size, the compensation of local volumetric power, which is usually underpredicted by RANS models, increased gas– liquid mass transfer insignificantly (by less than 5 %). However, calculation of the local bubble-size distribution increased the kLa value by 15 %. The simulation results of Pichia pastoris cell cultivation in industrial batch STR showed reasonable agreement against the experimental data obtained in an identical reactor at laboratory scale. The effect of the oxygenation rate on fermentation was found to increase biomass yield by shifting the metabolism from the fermentative path of sugar consumption to the oxidative path.

Different models available in published literature for turbulence and interphase forces were validated in STRs of different geometries operated over a wide range of operational conditions at both laboratory (14 dm3) and industrial (800 m3) scales. These models can accurately describe the hydrodynamics and mass transfer, and the coupled reaction kinetics of heterogeneous reacting flows in STRs that are often encountered in chemical processes. Being more flexible than empirical correlations regarding reactor geometry, the CFD models can provide insightful information of great detail. Thus, they can significantly improve the accuracy and reliability of reactor design and scale-up, as well as take the troubleshooting and reactor configuration design to the next level.