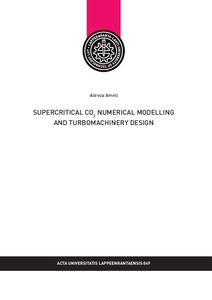 Supercritical CO2 Brayton cycles have attracted significant attention in recent years on the basis that they can achieve higher thermal efficiency at relatively lower turbine inlet temperature in comparison to conventional power cycles. Because a higher density is achieved near the critical point, the turbomachinery required is relatively compact. Fluid thermophysical properties near the critical point change non-linearly and sharply, thereby impacting the simulation and design processes. These rapid changes cause instabilities in the numerical modelling and experimental measurements. Coupling the real gas equation of states directly with the solver increases the simulation time significantly. Also, in some locations extremely near the critical point, an equation of states cannot predict the fluid properties. This thesis aims to address these issues. First, a method was developed which is possible to overcome the instabilities in the numerical simulations in near-critical point applications by using in-house code to generate a look-up table of the properties. After that, the look-up table was generated using different equation of states at different resolutions. The comparison between the look-up tables generated using different equation of states at different resolutions was conducted in different operating conditions near and far from the critical point. The possibility of condensation forming near the critical point was investigated and the study was extended by modelling the nonequilibrium condensation inside a converging-diverging nozzle in the vicinity of the critical point. During the last stage of the thesis, the compressor design procedure was studied using individual enthalpy loss models. Due to the small size of the compressor near the critical point, and the high density, skin friction loss attracted more attention. A further study on the skin friction loss and friction coefficient was conducted and, finally, the most accurate compressor design procedure for the near-critical point applications was developed using different loss correlations and validating the findings against the numerical simulations and experimental measurement.