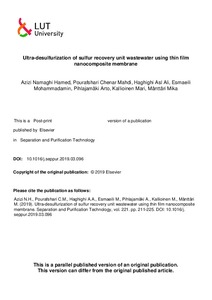 Herein, to meet the requirement of the stringent sulfur emission and discharge rate standards based on World Health Organization (WHO) and Environmental Protection Agency (EPA), polyamide/titanium dioxide (PA/TiO2) thin film nanocomposite (TFN) membranes were synthesized to remove sulfur compound from sulfur recovery unit (SRU) wastewater. The experiments were designed to appraise the effects of three independent factors including TiO2 nanoparticle concentration, transmembrane pressure (TMP), and operating temperature on membrane performance. Surface physiochemical and morphological properties of the resultant membranes were characterized with analytical techniques. The membrane characterizations revealed that the nanocomposite selective layer was formed on the surface of the substrate and its morphology and surface charge were affected by TiO2 loading. The performance test showed that TFN membrane was highly effective in sulfur removal as the minimum and maximum rejections with this type of membrane in the design space were 92.56% and 99.94%, respectively. In addition, the responses were predicted by the model equations designed via response surface methodology (RSM). Accordingly, the main effects and their interactions were statistically validated by the analysis of variance (ANOVA). In conclusion, the resulting TFN membranes demonstrated not only a very outstanding reduction in sulfur content (more than 97% below the aforementioned global surveillance standards’ level), but also overcame the trade-off effect between permeability and selectivity of the reference TFC membranes.