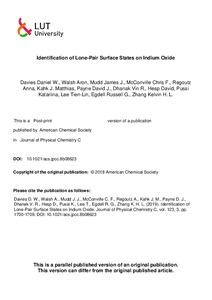 Indium oxide is widely used as a transparent electrode in optoelectronic devices and as a photocatalyst with activity for reduction of CO2. However, very little is known about the structural and electronic properties of its surfaces, particularly those prepared under reducing conditions. In this report, directional “lone-pair” surface states associated with filled 5s2 orbitals have been identified on vacuum-annealed In2O3(111) through a combination of hard and soft X-ray photoemission spectroscopy and density functional theory calculations. The lone pairs reside on indium ad-atoms in a formal +1 oxidation state, each of which traps two electrons into a localized hybrid orbital protruding away from the surface and lying just above the valence band maximum in photoemission spectra. The third electron associated with the ad-atoms is delocalized into the conduction band, thus producing the surface electron accumulation layer identified previously on vacuum-annealed In2O3(111) (1 × 1) surfaces. The surface structure is further supported by low-energy electron diffraction, but there is no chemical shift in indium core level X-ray photoelectron spectra between surface In(I) ad-atoms and bulk In(III). The 5s2 lone pairs confer Lewis basicity on the surface In sites and may have a pronounced impact on the catalytic or photocatalytic activity of reduced In2O3.