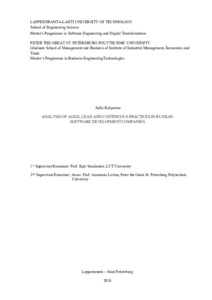 The goal of this research is to determine on what basis software development companies in Russia apply modern development approaches such as Agile, Lean development, and Continuous development. An analysis of 5 cases, based on 5 companies in St. Petersburg, was performed. Based on the analysis of the collected data, the main objectives, benefits, problems in the application of modern approaches were determined. In addition, the principles of choosing the approach were revealed and the differences between the use of such approaches in Russia and in the world were identified. Based on these data, recommendations for Russian companies, that are interested in expanding the use of modern approaches to software development in their work, were proposed. The results of this study may be potentially useful for such companies to understand the problem under discussion in a broader sense. In addition, this study may be interesting for the scientific community in Russia, as it draws attention to the problem of insufficient information about modern approaches to software development in Russia.