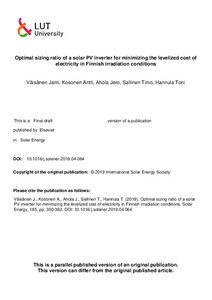 The amount of installed solar power in Finland is increasing as a result of decreasing photovoltaic (PV) system component prices. The growth is especially noticeable in residential systems, and ways to make PV electricity a more competitive choice for Finnish residents are studied. One of these ways is to decrease the solar PV electricity production costs by decreasing the investment costs by undersizing the inverter of the PV system. The objective of undersizing is to find the optimal array-to-inverter sizing ratio (AISR) where the ratio of the economic loss from the clipped energy to the economic gain from the decreased system investment achieved by an undersized inverter is lowest.

In this paper, the economically most optimal AISRs are determined for different residential array sizes, orientations, and inclinations when operating in Finnish locations and conditions. Calculations for each inverter size are carried out by using recorded Finnish meteorological data and the current Finnish PV system cost distribution, and by analyzing existing 1-s resolution production measurement data of a Finnish PV system. It is concluded that it is necessary to use 1-s resolution data as the use of 1-h resolution production data would lead to more significant undersizing caused by the power clipping occurring within an hour.

The optimal AISRs presented in this study are higher than the optimal ratios reported in previous studies for locations further south than Finland. This can be explained by the northern location of Finland, where the irradiance above Standard Test Conditions (STC) is lower than in central Europe, for example. This allows more significant undersizing as less energy is clipped even at higher ratios. In the case of south-oriented arrays in a 30° installation angle, the optimal AISRs for the 10 kW, 6 kW, and 3 kW inverters were 1.6, 1.8, and 2.08, respectively. Again, the AISRs for the southwest-southeast facade installations were 1.8, 1.9, and 2.17 for the inverters under study. They do not clip the produced energy as much as rooftop systems because their production is more evenly distributed throughout the day, yet they do not achieve as low production costs either. It is pointed out that if the PV self-consumption is optimized by using PV to heat water or batteries as a storage, limitation of the PV generation might not be the correct solution.