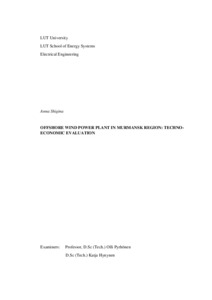 This thesis is aimed to design an offshore wind power plant (WPP) in Murmansk region and assess economic feasibility of it. The adjacent Barents and White seas are considered as promising for wind energy utilization.
First, a general description of the region from climate, geographical and economic perspectives is presented for preliminary definition of energy demand and external environmental conditions. The further analysis of the energy network close to the shore revealed a possibility to connect an offshore WPP to existing network on the south and the north of Kola Peninsula. Second, the particular site selection for the offshore WPP is made on the basis of a comprehensive analysis of the main energy characteristics of the wind according to meteorological data. Hence, the area between the mouths of the Varzuga and Chavanga rivers in Murmansk region was considered for the accurate evaluation of the potential of the wind resource based on the logarithmic wind profile and specific features of the relief. Third, the model, number and layout of wind turbines are defined according to energy efficiency indicators and depth of the sea floor. Thus, the offshore WPP was suggested to consist of 12 wind turbines SWT-3.6-120 located in the staggered order between 10 m and 20 m water depth. Further, the annual electricity production is clarified considering different energy losses, the most impact among which had icing losses. Fourth, assuming the main performance parameters of the offshore WPP, the electrical design was developed. Fifth, an economic evaluation is presented taking into account a support mechanism to promote renewable energy in Russia. On this basis financial parameters of the project ensuring a profitability and economic competitiveness assuming different external economic conditions were defined. It was concluded the offshore WPP in Murmansk region characterized by levelized cost of energy (LCOE) equal to 76 €/MWh is not profitable in considered environment mainly because of current wholesale electricity price development. Finally, the values of required capacity price, Feed-in-Tariff and ‘top-up’ payment, which ensure a profitability and competitiveness of the project, were defined under normal external conditions.