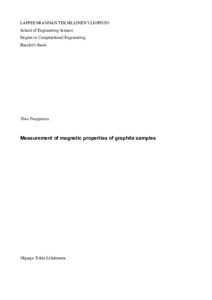 Multiple samples of graphite were given for measurement for the study. Three of them wereperforated, and two of them were pure to give a reference point to the perforated samples.The purpose was to measure and determine the magnetic behaviour of these samples using the SQUID magnetometer for measurements.

Using M(T) graphs drawn from the results using the GNU octave open source scripting language, it was found out that the perforated samples showed negligible ferromagnetic behaviour, while thepure samples behaved in a temperature-dependent paramagnetic way.

In addition, by plotting the inverse magnetization by temperature 1/(M(T)-M0) a fit for Curie-Weiss law was attempted, which resulted in low negative Curie temperatures in the range of 0 to -3 K and Curie constant in the range of 0.0009 to 0.0025 K*emu/g.