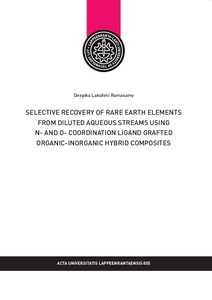 The dominance exerted by the rare earth elements (REE) on the significant technological advancements of the past decades has been unmitigated and unparalleled. With such an eminent role played by REEs, there exists a constant battle in striking a balance between the supply to demand ratio, especially due to the geographical constraints imposed by the natural distribution of these elements. With China, the major producer of REE (over 95%) imposing severe restrictions on exports, coupled with the closure of several operating mines has led to the dire need of finding alternate means to fulfill the resource requirement through sustainable and self-sufficient means. Hence, alternate routes for primary REE production to acquire a steady and self-reliant supply of these elements are constantly explored. Further, much emphasis has been laid on finding schemes that fit well within the scope of a circular economy. The utilization and re-use of waste resulting from a number of industrial processes hold the potential to function as secondary raw materials for REE procurement. However, the establishment of efficient schemes to accomplish this goal can be hugely challenging. One prominent example would be the recovery of low concentrated REEs effectively and selectively from diluted industrial streams i.e. from massive amounts of wastewater. For this purpose, adsorption would be of great relevance in metal recovery from dilute aqueous solutions with the domain being constantly updated through the state-of-the-art methodologies and design of efficient adsorbents for a variety of applications.

The synthesis and identification of adsorbents that exhibit high REE selectivity in conjuncture with excellent REE adsorption performance is the prime objective of this Ph.D. work. Recent evidence from literature point towards the efficacies of organic-inorganic hybrid adsorbents for metal sorption. Along this line, the present study aims to amalgamate the desirable feature of the organic supports (diverse functional groups) such as chitosan, carbon nanotubes, activated carbon and marine algae with those of inorganic silica (robust and thermally stable) through hybridization process using silane as a coupling agent. An in-depth characterization of the physicochemical attributes of these hybrid adsorbents was performed using various analytical techniques, the results of which are summarized in this thesis. Further, the study revealed that the hybridization coupled with ligand grafting step resulted in the improvement of REE binding affinity as well as selectivity of the materials owing to their synergic effects. Besides, it is also of prime importance to establish adept, easy and reproducible fabrication schemes for the design of hybrid composites bearing a wide range of tailor-made properties and functionalities utilizing the rich surface chemistry of the supports. Hence, during the course of this research work, two different synthetic pathways were analyzed namely the direct single-pot (single step) and the step-by-step telescopic synthesis. This comparative assessment led to the identification of the ideal ligand-grafting pathways for various support materials and their predominant role towards REE affinity/selectivity.

Given the importance of scandium (Sc) in cutting-edge applications, selective separation of Sc from REE mixture was attempted through the exploitation of its varying chemical reactivity among REEs. The findings of this study exposed the inability of the non-hybrid carbon nanotubes (CNT), activated carbon (AC) and chitosan adsorbents to adsorb any REE (except Sc) without silica hybridization. The knowledge gained from the aforementioned experiments helped to design a two-stage REE separation and concentration process, manifested from both the hybrid and the nonhybrid materials, to selectively separate Sc from REE mixtures. To ascertain the superiority of the synthesized adsorbents, the process was also tested with acidic mine drainage (AMD) and seawater, the results of which were used to identify the best adsorbents possessing enhanced REE selectivity and affinity.

Thus, a concise overview of the milestones reached during this Ph.D. would include the development of highly efficient hybrid adsorbents, particularly organic-inorganic hybrid composites that possess exemplary REE selectivity and the identification of viable commercial fabrication schemes that can be adopted with minimal effort. The analysis of REE intraseries adsorption trends would supplement the existing knowledge on REE-host interactions and the selectivity towards the light or heavy REEs for various materials. The insights gained from this comprehensive research work would help accelerate the progress towards a sustainable future through the efficient utilization of alternate resources for REEs.