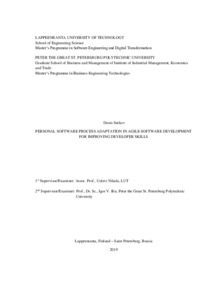 This work examines the options for the development of professional skills of software developers, performed according to Agile methodologies. As part of this study, data from fifteen IT projects implemented by two companies in the city of St. Petersburg was collected and analyzed. Comparison and description of each phase of the project throughout the entire development lifecycle were made, which revealed the differences in project management and their weaknesses, which lead to the appearance of defects in the developed software. Based on the analyzed projects, recommendations were made for improving the qualifications of developers and expanding their skills in business analysis. The results that were obtained in the course of this study can be useful to all developers whose responsibilities go beyond the writing of code, as well as to the management staff in the IT field for developing their team.