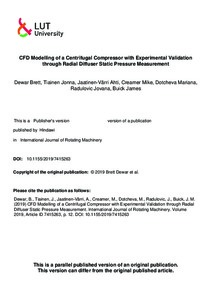 This paper compares experimental static pressure measurement with CFD simulation in a centrifugal compressor at 12 points through the diffuser. Three mass flow rates are selected, each for three operating speeds giving nine total operating conditions. The results show that the CFD model generally slightly underpredicts the static pressure value as compared to the experimental results.
The discrepancy between experimental and numerical results ranges between -8% and +6% and is fairly consistent for a given operating condition, except for close to the blade trailing edge where the pressure variation is less regular and where the pressure is increasing most rapidly with radial position. In the consistent region, where the pressure gradient is low, the discrepancy is around two percent or less for simulations close to the design operating point. Away fromthe design operating point the errors increase up to approximately 5%.The simulation results were also used to investigate the effect of the position (from the blade trailing edge) of the impeller-diffuser interface (a characteristic of the frozen rotor simulation approach). Here an optimal position for the interface was found to be 2% of the blade radius.This value gave improved agreement with the experimental result in the initial region of the diffuser up to a distance of approximately 10% of the radius. At greater distances the position of the interface became less important.
The results also highlighted a change in the pressure along the spanwise direction close to the tips. A dip in the pressure, which was observed in the experimental results, was only observed in the simulations close to the shroud. Close to the hub the simulation results recorded a small local peak.The simulation approach was then applied to further study the flow characteristics by examining the full-field velocity and pressure contours in the impeller and diffuser regions to identify changes due to the different operating conditions.