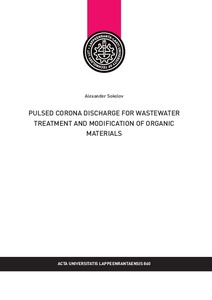 Sustainable development is one of the most important questions in the contemporary world. Wastewater treatment and the search for renewable sources of organic products are essential, not only in the future but also for present generations. The existing conventional methods used for wastewater treatment are not able to meet these challenges. There is an urgent need to develop new technologies. Advanced oxidation processes (AOPs), based on hydroxyl radical oxidation, are considered as an alternative. Gas-phase pulsed corona discharge (PCD) is one the AOPs, wherein active oxidants species, mainly OH radicals and ozone, are generated in situ from oxygen and water. This thesis is focused on research about the implementation of cold plasma technology, specifically PCD, for wastewater treatment and the modification of organic compounds.

Such a relative new threat for water usage as pharmaceuticals were the main target compounds for investigation. Pharmaceutical compounds are present in natural waters and their concentration is continuously growing as most of them, especially antibiotics, are not biodegradable and can pass through treatment facilities without degradation. Additionally, the applicability of PCD technology for thiosulfate abatement was studied. Thiosulfates are considered a potential replacement of hazardous cyanides in the leaching process of high-value metals. There are a lot of studies about it; however, water’s purification from thiosulfates remains unexplored.

In order to remove pollutants from water in an efficient and environmentally safe manner, it is necessary to investigate the behaviour of the target compounds in the field of cold plasma. For this purpose, the formation of oxidation by-products and the degradation kinetics of target compounds were studied. The study took into account such parameters as pH, the initial concentration of the studied components, gas-phase composition, the water flow rate and the pulse repetition frequency. Particular attention was paid to the effect of the temperature of the treated solution on the oxidation process. Most of the studies about the implementation of electrical discharges for wastewater treatment have been done at ambient temperature, and experiments at lower or elevated temperatures have not been reported in the related literature.

Furthermore, a great number of studies reported in the literature are focused on research wherein only one component is dissolved in water, and aqueous solution systems with several components are little studied. Therefore, one of the objectives of this thesis was to investigate the effect of the multicomponent system on the oxidation process. Energy efficiency was the main evaluation parameter of PCD performance.

In order to extend the potential application of cold plasma technology as a technology for the formation of value-added products, the thesis also includes a study about the treatment of lignin by PCD and its influence on lignin structure. Aldehyde formation was observed during the treatment and it was found that PCD considerably altered lignin structure and made it polymeric or oligomeric with a high number of carboxyl or carbonyl groups.

Most of the oxidation reactions of the studied pharmaceuticals can be described by an exponential function while the thiosulfate concentration decreases at a constant rate over time. Experiments with different temperatures have shown that temperature has no effect on reaction order. An elevated temperature of 50 °C significantly decreased the energy efficiency and reaction speed compared to 20 °C. No differences in oxidation efficiencies were observed between the results obtained at room temperature and at 10 °C. Increased pulse-repetition frequency significantly accelerates the oxidation process; however, the energy efficiency becomes lower at a higher frequency, except for the thiosulfate reactions. An atmosphere with a high oxygen content accelerates the oxidation process and contributes to less energy consumption. A low oxygen content leads to milder oxidation conditions and, along with a higher initial concentration of lignin, it is preferable for the conversion of lignin into aldehydes. The sulfamethizole reaction is not sensitive to pH changes while, in the case of other studied pharmaceuticals, pH has a significant impact. All the intermediates detected during the oxidation process were degraded by the end of the treatment, and the qualitative composition of oxidation byproducts does not depend on whether the system is single- or multicomponent.