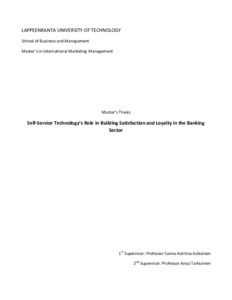 This quantitative thesis concentrates on investigating self-service technology’s perceived value on customer satisfaction and loyalty. This study focuses much on the term value-in-context, which means that value is always context dependent. Based on this assumption value can be realized differently by different customers. Unique skills and preferences can influence the experienced value of using self-service technology. This realized value can also change within time as the skills and knowledge of the user can grow.
Based on the value-in-context theory, this study investigates different value components based on the previous literature which might increase customer satisfaction. These are ease of use, self-control, usefulness and costs saved. A questionnaire on the users feelings towards the use of mobile banking application was conducted and analyzed with SPSS, and based on that this study identified usefulness and costs saved as value attributes which have a positive effect on satisfaction.
This study also studied the correlation of satisfaction to loyalty. Previous literature also identified that relationships with satisfaction and trust lead to loyalty often than relationships with just satisfaction. Therefore trust’s correlation was also measured against loyalty. Theory also suggests that a relationship can also have loyalty without satisfaction and trust, because of high switching costs. Therefore switching costs were also studied against loyalty to see the correlation. The outcome was that from these measures satisfaction and trust was seen as having positive correlation with loyalty.