The impact of branding on satisfaction and loyalty of millennials : The case of retail banks in the Slovak Republic 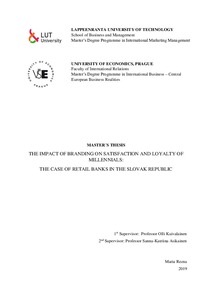 Retail banking industry faces a number of challenges, the biggest one being increasing competition, which makes gaining a sustainable competitive advantage difficult. This implies that banks need to focus on building customer satisfaction and turning it to loyalty, which represents the company´s ultimate competitive advantage. Hence, the objective of this research is to investigate how effectively retail banks use branding and what effects it has on satisfaction and loyalty of millennial customers in the context of the Slovak Republic. The study has been conducted using both qualitative and quantitative methods. The qualitative part of the research is concerned with case studies analysing the four biggest Slovak retail banks, namely Slovenská sporiteľňa, Všeobecná úverová banka, Tatra banka and Československá obchodná banka and how they adopted branding. The quantitative part focuses on a questionnaire exploring how Slovak millennials perceive branding of their banks and how effective it is in building satisfaction and loyalty. The results indicate that retail banks have not taken a full advantage of branding as it was found to contribute to satisfaction, especially in case of service quality and brand image, however, it was only effective to a small extent in building loyalty. Despite considering themselves loyal and possessing behaviours and attitudes implying loyalty, loyalty of millennials was based mostly on inertia, convenience and lack of benefits offered by other financial institutions that would be worth additional effort of switching the bank.