Social Enterprise: A Study of Its Prevalence, Role and Characteristics in Swedish‐Speaking Regions of Finland 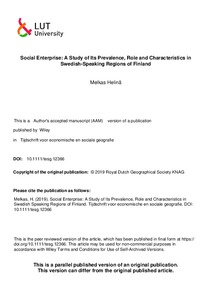 An increasing literature has emerged to examine development of social enterprises (SEs) in varying national or regional contexts. This paper presents empirical research on SEs in Finland’s Swedish‐speaking regions. Differences between Finnish speakers and Swedish speakers have been identified in studies on, for instance, social capital and communality. Both groups have equal constitutional status. This study focuses on the prevalence, role and characteristics of SEs in Swedish‐speaking regions. The research data consist of statistical and other background data, a survey and strategy documents. The study shows that SEs do not appear to be more common in the Swedish‐speaking regions, despite positive preconditions for SEs and their operations in those regions. At the same time, Finnish SEs still appear to face similar challenges in, for instance, their funding and management, and general prejudice and ignorance about SEs.