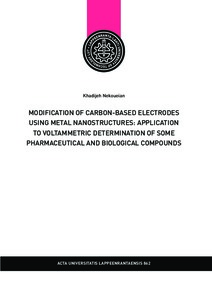 In this study, new modified carbon-based electrodes were fabricated and applied in the detection and determination of several medicines and water pollutants. Modification enhanced the use of these electrodes for analytical measurements. A modified carbon paste electrode and modified glassy carbon electrode were applied as desired working electrodes. Different modifiers such as KolliphorEL, gold/palladium/multi-walled carbon nanotubes nanocomposite, palladium nanoparticles and carbon-modified titanium dioxide nanocomposite were synthesised using chemical and electrochemical methods and were characterised using different techniques such as scanning electron microscopy (SEM), X-ray photoelectron spectroscopy (XPS), X-ray diffraction (XRD) and Fourier transform infrared techniques (FTIR). Then, these prepared modifiers were employed to modify the surface or matrix of the carbon-based electrodes. Electrochemical impedance spectroscopy and cyclic voltammetry methods were utilised to investigate the effect of the modification on the rate of the electron transfer at the modified electrodes.

The modified carbon-based electrodes were employed efficiently to determine trace amounts of pharmaceutical and biological compounds by using voltammetric methods such as differential pulse voltammetry. The experimental conditions of the voltammetric measurements such as the pH of the buffered solutions and potential sweep rate were optimised to obtain a well-defined response signal.