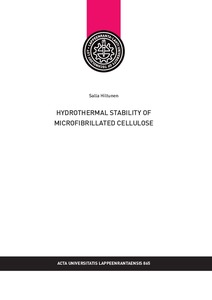 It was found that hydrothermal treatment under batch conditions affected the MFC gel structure by reducing its water retention capacity. The viscosity of the gels was also reduced to an extent that depended on the MFC grade used. The pH of the gels also decreased, indicating the formation of acidic compounds. Analysis of the hydrolysis products revealed that the filtrates contained a complex mixture of different degradation products, some of them only in trace amounts, and some components remained unknown. The main hydrolysis products formed were sugars and numerous carboxylic acids. Hydrothermal treatment also led to an increase in the UV/VIS absorption of the gels indicating the presence of chromophores.

The NaCMC solutions were sensitive to hydrothermal treatment, as the viscosity of NaCMC solutions decreased already after a brief steam treatments. Short-term steam treatment did not lead to any deterioration in the properties of MFC and MFC/NaCMC blend, but an increase in the viscosity and in the storage and loss moduli was observed, probably because exposure of MFC to shear forces and high temperature under jet cooking further disintegrates or disperses MFC. The addition of NaCMC to a MFC suspension led to a relatively high viscosity of the MFC/NaCMC mix after jet cooking, due to a dispersing effect of NaCMC and because jet cooking gave a more efficient mixing of the materials.