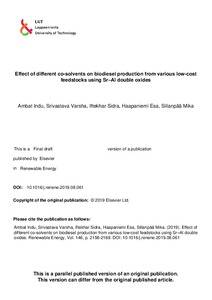 The main objective of the present paper comprises the investigation of biodiesel production from low-cost feedstock such as lard oil and waste cooking oil (WCO) using Sr-Al double oxides. Nanocatalyst was characterised FTIR, XRD, SEM, TEM, BET and XPS. The Sr:Al with 3:1 molar ratio showed the best catalytic activity in the conversion of both oils to fatty acid methyl ester. The effect of acetone and tetrahydrofuran (THF) as a co-solvent for transesterification were compared and the best result was obtained with 5 % THF. The mutual effect of the nanocatalyst and co-solvent on biodiesel production was investigated. The characterisation of biodiesel synthesised from lard oil and WCO was performed with GC-MS, 1H and 13C NMR. Moreover, the optimum reaction parameters for transesterification reaction was analysed and the yield was determined by 1H NMR. The maximum yield of 99.7% and 99.4% of lard oil methyl ester and WCO biodiesel were observed with a 0.9 wt% catalyst amount, 1:5.5 oil to methanol ratio in a reaction time of 45 minutes at 50°C and 60°C, respectively. The properties of biodiesel from lard oil and WCO were determined by the EN 14214 method. The regeneration, characterization and reusability of regenerated catalyst was observed.