Lignin as a functional additive in a biocomposite: Influence on mechanical properties of polylactic acid composites 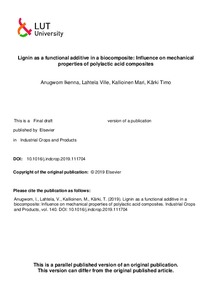 In this research, lignin and modified lignin were used as a biobased additive in the manufacturing of biocomposites. The biocomposites were produced from polylactic acid (PLA) and wood. Lignin used in this study was recovered both from spruce and from construction and demolition waste (CDW) by extracting it with a deep eutectic solvent (DES), and part of the recovered lignin was modified in esterification with maleic anhydride. The implementation of lignins on biobased composites in filament extrusion was tested and the influence of lignin on the composite manufacturing process and mechanical characteristics of the produced biocomposites was evaluated and discussed. The results showed that lignin compounds can be used as a part of biocomposites based on PLA and wood material, because the lowest tensile strength was achieved with samples which did not contain any commercial coupling agent compounds. Lignin was found to act in the biocomposites more as a coupling agent than as a lubricant, and the coupling agent strength effect of esterified lignin was comparable to the commercial coupling agent used in these experiments. The best specific tensile strength of filaments achieved in this study were 7.68 and 7.71 MPa for materials that included commercial coupling agent and esterified lignin, respectively.