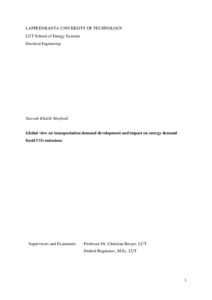 The pivotal target of the Paris Agreement is to keep temperature rise well below 2 °C above the pre-industrial level and pursue efforts to limit temperature rise to 1.5 °C. In order to meet this target, all energy consuming sectors including the transport sector need to be restructured. The transport sector accounted for 19% of the global final energy demand in 2015, of which the vast majority was supplied by fossil fuels, of around 31,080 TWh. Fossil fuel consumption leads to greenhouse gas emissions, which accounted for about 8260 MtCO2eq from the transport sector in 2015. This paper examines the transportation demand that can be expected and how alternative transportation technologies along with new sustainable energy sources can impact the energy demand and emissions trend in the transport sector until 2050. Battery electric vehicles and fuel cell electric vehicles are the two most promising technologies for the future on roads. Electric ships and airplanes for shorter distances and hydrogen-based synthetic fuels for longer distances may appear around 2030 onwards to reduce the emissions from the marine and aviation transport modes. The rail mode will stay the least energy-demanding, compared to the other transport modes. An ambitious scenario for achieving zero greenhouse gas emissions by 2050 is applied, also demonstrating the very high relevance of direct and indirect electrification of the transport sector. Fossil fuel demand can be reduced to zero by 2050, however, the electricity demand is projected to rise from 125 TWhel in 2015 to about 51,610 TWhel in 2050, substantially driven by indirect electricity demand for the production of synthetic fuels. While the transportation demand roughly triples from 2015 to 2050, substantial efficiency gains enable an almost stable final energy demand for the transport sector, as a consequence of broad electrification. The overall Well-to-Wheel efficiency in the transport sector increases from 26% in 2015 to 39% in 2050, resulting in a respective reduction of overall losses from primary energy to mechanical energy in vehicles. Power-to-fuels needed mainly for marine and aviation transport is not a significant burden for the overall transport sector efficiency. The primary energy base of the transport sector switches in the next decades from fossil resources to renewable electricity, driven by higher efficiency and sustainability.