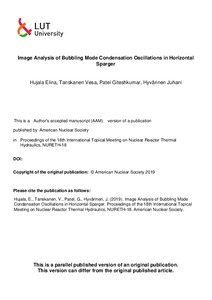 Pattern recognition based image analysis algorithm was developed for analyzation of bubbling mode
condensation oscillations in horizontal spargers. Safety relief valve test rig SEF-POOL was filled with a
heated up (85 oC) water. The high mass flux steam (180 kg/(m2s) was pushed through a horizontal sparger (16 mm). The SEF-INF2 experiment was recorded using a high-speed video camera with a frame rate of 2800 fps. An improved image processing and analysis procedure have been applied to the video material. A new algorithm can deal with multiple simultaneous bubbles that can disappear for a while during the condensation. Features of the oscillating bubbles, e.g. formation frequency, lifetime, surface velocity, and acceleration, have been evaluated. The evaluated properties of the bubbles were also applied to CFD simulations, where the algorithm was used to determine critical wavelengths in succession to establish the most suitable grid density for the simulations. The preliminary results look promising. A large frame rate (2800 fps) yields significant information about condensation oscillations. Consequently, the bubble properties and oscillations are captured better than before. The accuracy of the pattern recognition algorithm has also been increased. 67 bubbles were tracked. Bubble mean lifetime was 0.0247 s, mean time difference between bubble formations was 0.0140 s which corresponds to 71.6 Hz formation frequency. 2D surface velocities and accelerations can now be estimated in all angles, which makes image analysis an effective tool in validation efforts of interfacial area and heat transfer models for numerical.