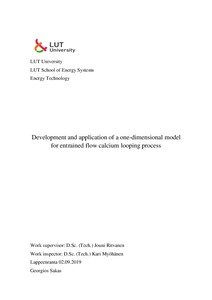 The utilization of fossil fuels like coal, oil and gas for power production has steadily increased the amount of CO2 in the Earth’s atmosphere, with negative consequences in the climate. Thus, the scientific community indicated the importance of developing efficient carbon capture systems (CCS). In addition, the second-generation CCS of calcium looping process (CaL), through the years has been proven efficient enough and worth for further studies.
The objective of this report aims in developing an entrained flow 1D-Model for the CaL, where the reactors are interconnected to each other, with dynamic balance exchange of solids flow, and further utilization of it in the cement production line.
The work resulted to successful simulation of the pneumatic conveying for fully entrained flow with accurate gas and mass concentration profiles across the length of the reactors. In addition, potential air leak in the end of the carbonator indicated slight reduction of the total temperature in the reactor and decline of the overall CO2 capture efficiency. Added, the choking velocity values predicted were reasonable and proved the safe operation of the system under the pneumatic transport regime. Furthermore, the maximum sorbent capacity and solid internal recirculation of the material back in the carbonator proved to have a sensitive role regarding the efficiency of the CaL process.
This work was done in LUT University as part of the CLEANKER project.