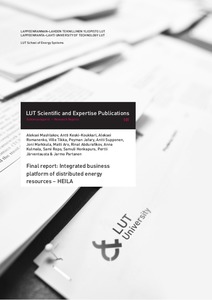 Energy systems are in a major process of transition from both technology and business perspective. The amount of distributed generation is increasing, load profiles are changing and new types of controllable and uncontrollable resources are being connected to the system (e.g. storage units, electric vehicles). In general, these resources are called distributed energy resources (DERs). The role of microgrids, energy communities and aggregators (virtual power plants) is being particularly emphasized in the electrical system because they create an opportunity for new kind of flexibility provided by DERs, but also introduce new challenges to energy system management. Business potential of intelligent energy solutions is enormous but there are still major barriers that block most of the novel business opportunities in the present energy system. One of the most significant technical barrier is the lack of widely accepted interoperable information exchange solution (data model and interfaces) that is easily accessible and fulfills business needs by all parties dealing with the energy system.
HEILA project aims to define, implement and demonstrate an integrated business platform of DERs for information exchange between energy market participants. The first implementation of such a platform will be realized during the project to integrate smart grid demonstrations in Finland to develop, test, pilot and finally also commercialize new smart energy system functionalities consisting of interactions and impacts of multiple participants. Development of such a system begins as a national smart grid demonstration platform in Finland but will be designed to support Europe wide deployment of the system.