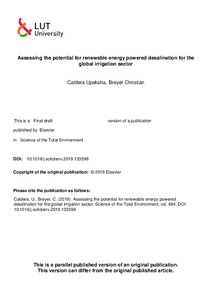 Science of the Total Environment

By 2050, it is estimated that the annual cereal production would need to increase by about 140% and total global food production increase by 70%. Meanwhile, total water withdrawals for irrigation are projected to increase by 11%. In contrast, poor management of existing water resources, pollution and climate change has resulted in limited freshwater resources. The aim of this paper is to assess how improved irrigation efficiency and renewable energy based desalination maybe used to secure future water supplies for the growth of rice, wheat and maize.

It was found that improving the average irrigation efficiency to 60% by 2030, led to a 64% reduction in total desalination demand. Similarly, an improvement towards 90% irrigation efficiency, by 2050, translates to an 80% reduction in global desalination demand. In 2030, the total water cost is mostly within 0.7 €/m3–2 €/m3 including water transportation costs. Literature reports that farmers may be willing to pay up to 0.63 €/m3 for their irrigation water. The global range in 2050 is estimated to be 0.45 €/m3–1.7 €/m3 reflecting the lower system costs in 2050.