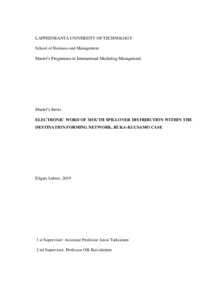 Electronic word of mouth (eWOM) is the well-known phenomena and its impact to companies is widely covered topic. However, in the case of the tourism industry, the impact of eWOM is studied only to a focal object or the whole destination. At the same time, existing theories leads to the assumption that eWOM affects not only a focal object or destination but also non-focal objects within the network that forms a destination through the spillover effect. This, in turn, discovers the gap in the existing literature. This work is aimed to cover the gap by exploring the electronic word of mouth spillover appearance and distribution within destination forming network as well as emphasize the importance of utilization of network approach in destination management.
The empirical part of this work is based on the data gathered from 689 participants randomly assigned to the three groups. Each group had been asked to evaluate changes in their attitude towards the objects from the destination network after reading differently valent eWOM (positive, negative and neutral). The results of this study show the existence of spillover effect to the non-focal objects from a network generated by eWOM related to a focal object from the same network. This, in turn, suggest that commonly used evaluation only of the direct impact of eWOM to a destination or its forming components may lead to the risk that the impact will be underestimated since the power of spillover effect generated by eWOM is not considered in this case.