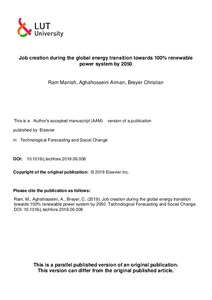 Aside from reducing the energy sector's negative impacts on the environment, renewable power generation technologies are creating new wealth and becoming important job creators for the 21st century. Employment creation over the duration of the global energy transition is an important aspect to explore, which could have policy ramifications around the world. This research focuses on the employment impact of an accelerated uptake of renewable electricity generation that sees the world derive 100% of its electricity from renewable sources by 2050, in order to meet the goals set by the Paris Agreement. An analytical job creation assessment for the global power sector from 2015 to 2050 is estimated and presented on a regional basis. It is found that the global direct jobs associated with the electricity sector increases from about 21 million in 2015 to nearly 35 million in 2050. Solar PV, batteries and wind power are the major job creating technologies during the energy transition from 2015 to 2050. This is the first global study presenting job creation projections for energy storage. The results indicate that a global energy transition will have an overall positive impact on the future stability and growth of economies around the world.