Pathway towards achieving 100% renewable electricity by 2050 for South Africa 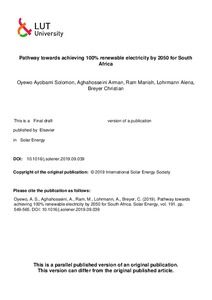 Transition to a cost effective and fossil carbon-free energy system is imminent for South Africa, so is the mitigation of issues associated with the ‘water-energy nexus’ and their consequent impacts on the climate. The country’s key fossil carbon mitigation option lies in the energy sector, especially in shifting away from the coal-dependent power system. Pathways towards a fully decarbonised and least cost electricity system are investigated for South Africa. The energy transition is simulated for five scenarios, assessing the impact of various factors such as sector coupling, with and without greenhouse gas (GHG) emission costs. South Africa’s energy transition is simulated using an hourly resolved model until 2050. This modelling approach synthesises and reflects in-depth insights of how the demand from the power sector can be met. The optimisation for each 5-year time period is carried out based on assumed costs and technological status until 2050. The modelling outcomes reveal that solar PV and wind energy, supplying about 71% and 28% of the demand respectively in the Best Policy Scenario for 2050, can overcome coal dependency of the power sector. The levelised cost of electricity increases just slightly from 49.2 €/MWh in 2015 to 50.8 €/MWh in the Best Policy Scenario, whereas it increases significantly to 104.9 €/MWh in the Current Policy Scenario by 2050. Further, without considering GHG emissions costs, the cost of electricity slightly increases from 44.1 €/MWh in 2015 to 47.1 €/MWh in the Best Policy Scenario and increases up to 62.8 €/MWh in the Current Policy Scenario by 2050. The cost of electricity is 25% lower in the Best Policy Scenario than in the Current Policy Scenario without factoring in GHG emissions costs and further declined to 50% with GHG emissions costs. The Best Policy Scenario without GHG emissions costs led to 96% renewables and the remaining 4% is supplied by coal and gas turbines, indicating pure market economics. The results indicate that a 100% renewable energy system is the least-cost, least-water intensive, least-GHG-emitting and most job-rich option for the South African energy system in the mid-term future. No new coal and nuclear power plants are installed in the least-cost pathway, and existing fossil fuel capacities are phased out based on their technical lifetime.