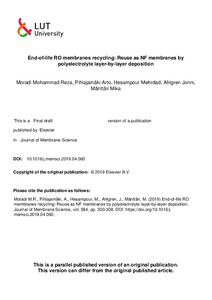 Nowadays, end-of-life (EoL) reverse osmosis (RO) membranes are considered as waste, hence they are incinerated or discarded in landfills. Due to the environmental problem of disposed membranes, their reuse as nanofiltration (NF) membranes was investigated in this study. At first, the fouling of EoL membrane was cleaned and then the effect of sodium hypochlorite (NaOCl) on removing the polyamide (PA) layer and pure water permeability (PWP) of EoL membranes was investigated. With regard to NaOCl exposure intensities, three groups of EoL membranes with PWP of about 10, 20, and 30 L/(m2h bar) were selected as substrates to convert them to NF membranes by deposition of polyelectrolyte (PE) multilayers. The effects of PE type, substrate permeability, and the charge of outer layer on the performance of the resultant NF membranes were studied. As one of the best results, NF membrane composed of eight bilayers of SC498/KE253 polyelectrolytes on substrates with PWP of 18 L/(m2h bar) had salt water permeability (SWP) of 11 L/(m2h bar) and 94% rejection of MgSO4. Other results are also competitive with commercial NF membranes. The maximum NaCl and MgSO4 rejection of prepared membranes were 92% and 98%, respectively, at a feed pressure of 10 bar. In addition, the stability test showed that the prepared membranes are stable over a long period of filtration.